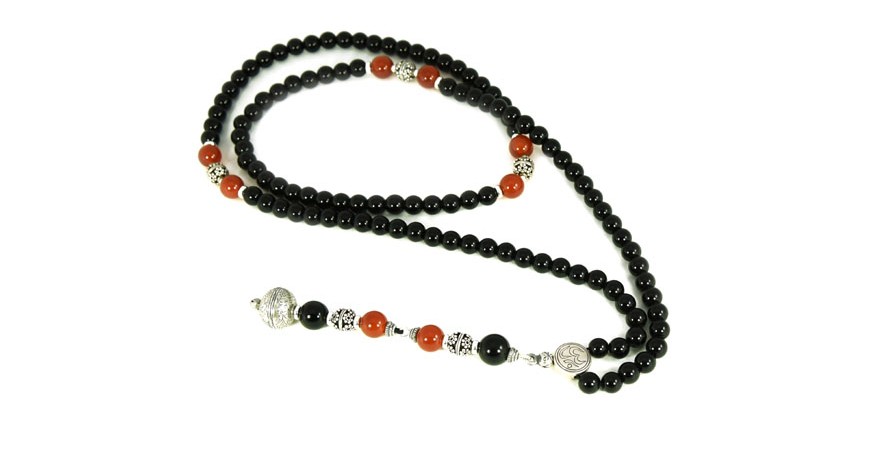 In the course of history, man has created all kinds of garlands· for the decoration of the head, the neck, of the arms, wrists, waist and legs.

Almost every religion has created a prayer garland to assist believers complete a specific number of prayers without counting. During the period of Ottoman Empire, Turkish officers took their prayer garland and turned it into a show of welfare accessory. They used silver, gold and silk to decorate their garlands with large amber beads. They were holding these garlands to relax their nervous system and their body. The relaxation is due to the electricity that amber carries. Eventually, such garlands functioned as symbols of power and as a medium of projecting the Ego. The Greek associates of the Turks imitated this habit. It has been established since then and until today we – the Greeks – create and hold garlands in our hands.

Nowadays, social conditions inflict stress and anxiety on people. Thus, they are often led to smoking, drinking, receiving anxiolytics… Our company “ΕΥΧΑΝΤΡΟΝ” (EFHANTROΝ) has created and suggests a new type of garland – jewellery that is basically used as an anxiolytic without side effects! Men, women and children of any age can keep one. This garland – jewellery is consisted of natural crystal beads full of positive energy and of silver and golden elements. It’s a work of Art expressing the Greek aesthetics, culture and civilization. It is created by the artist Tasos Thomaidis. Tasos Thomaidis named his creation εύχαντρο (efhantro). The word means beads that offer pleasure. It’s a compound word consisted of the word εύ (ef) =anything pleasant, and the word χάντρα (hantra)=bead.

Every person is driven by his/hers subconscious or conscious reasons to hold or not a garland. For instance, the type of garland they choose, out of the hundreds that are available in the market, and the way they keep it, reflects their personality. So we remark that, the tacky ones keep ugly garlands, the elegant keep real works of art. The low-paid keep garlands made out of cheap elements, the wealthy people keep ones made out of rare and expensive materials. People, who feel the need to attract other people’s attention, spin their garlands in the hand and knock the beads among them. The ones that are self-confident, take care of themselves and have no need for show off, they caress their garland tenderly and leisurely. These people consider their efhantra and use them as:

• The path of creative imagination: It is scientifically accepted that if the beads or the silk tassel are caressed by the owner’s hand while focusing or thinking on an idea, then the body and the nervous system are relaxed! Worry beads can activate the right hemisphere of the brain, awakening vision, intuition, creative imagination and other synthetic cognitive functions!

• A creation to keep our hands busy: hence practicing them and making them more skillful.

• An accessory to release stress: when the beads and the tassel are caressed, the fingers reconfirm their texture and shape and release the body from anxiety, without any side effects. Also, the satisfaction from hearing, touching, the sight and smell of worry beads all offer additional relaxation.

• A natural remedy: because when the beads are made of amber and natural crystals they can balance the concentration of ions in the body and help dissipate static electricity. Modern neuropsychiatric accepts that massage on the fingertips using beads can reduce anxiety and relaxes the nervous system.

• A medium for ecstasy: because caressing the beads and the silken tassel of worry beads has the same effect as when babies caress a soft cloth or a teddy bear.

• A cure and prevention of bad habits: such as smoking and nail eating.

• An Amulet: when they carry symbols of faith and good luck.

• Pieces of Jewellery: when they are handcrafted from noble metals and the beads are made of natural materials such as amber, semi-precious stones, corals, pearls etc. (Or when women wear worry beads as a necklace).

• A symbol of heritage and prestige: when they are sophisticated, expensive, impressive and collectible.

• A mirror of our personality; when worry beads are used to express the owner’s aesthetics, personality and culture.

The company ΕΥΧΑΝΤΡΟΝ (Efhantron) creates garlands that are targeted at these people. We have also established a club, that anyone can sign the application and become a member.