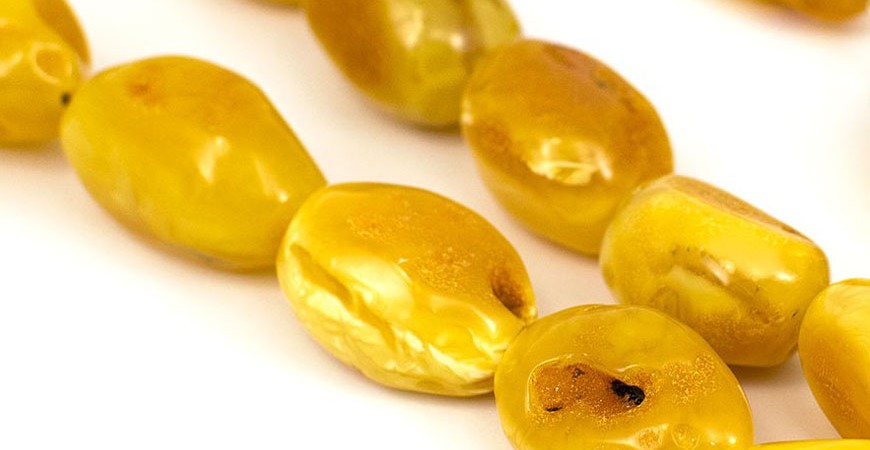 The name Amber derives from the Arabic word anbar that refers to ambergris, a sperm whales’ secretion which in past times, was mistakenly confused with the fossilized golden-hued vegetal resins. In ancient Greek people it was well known as “electron”. Thales of Miletus made experiments on it, recorded phenomena which today are classified in electricity and are the field where electron (amber) owes its properties. The Turkish word for amber is kehribar, which in turn derives from the Arabic word kahruba, which means “that which attracts haystack”, presumably due to its known properties of attracting light material, after rubbing amber on a wool garment. Amber is the fossilized resin of coniferous trees, which exceeds the age of 30 million years, it contains succinic acid and it is a source of electricity. Amber comes from molecular polymers that result the impact of very high pressures and temperatures which are produced by the overlying sediments and convert the resin to a copal first (plain fossil). After passing of millions of years, the effects of pressures and temperatures lead to the formation of amber. But there are other requirements for the creation of amber, as the... 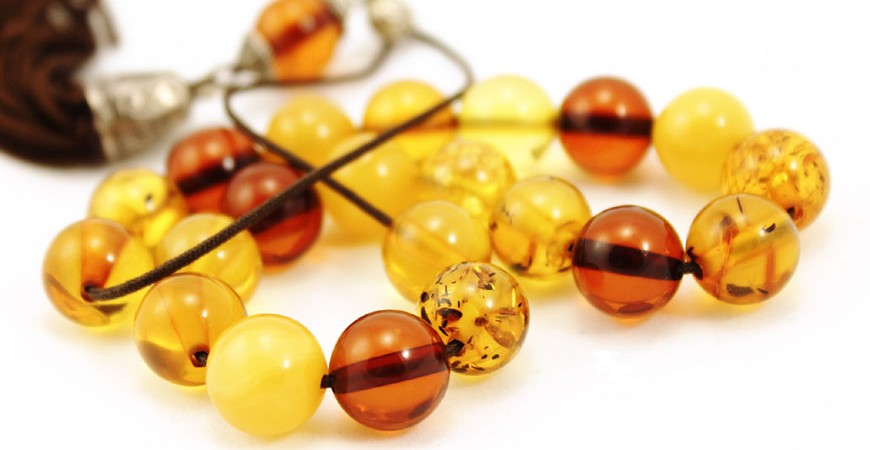 Due to the color, the warmth and electrical properties of amber the reputation of its protective and magical nature is widely known since antiquity. So it is not surprising that thousands of years now it was burned as incense during religious and spiritual ceremonies. While burned, amber releases a pleasant pine scent. Due to its organic nature, the color of amber often varies and depends on a) the type of the coniferous tree, b) the ground's components and c) the high pressures and temperatures it has suffered, during the millions of years, it was inside the soil. Low temperatures and pressures give light shades of yellow or gold. While these are increased the colors darken and they range from honey amber to dark brown. Genuine amber is soft and warm to the touch, unlike the plastic which is hard and cool. Amber, according to tradition is a powerful healer and cleanser of the body, mind and spirit as: - Draws the disease from the body and heals and renews the nervous system. - It absorbs pain and negative energy, helping to alleviate stress. - Clears depression, stimulates the intellect and promotes self-confidence and creative self-expression. - Attracks happiness and...

Baltic amber or sussinite is the fossil resin coming from coniferous trees aged of more than 25 million years . The fossil resins that do not meet the above conditions are not amber. They are just fossils called copal. Baltic amber is aged about 44 million years or more with a special feature of its high content in succinic acid, about 8 % (that is why Baltic amber is also called Succinite, while all the rest “lookalike amber” resins but younger are called Retinites).In this acid is primarily the distinctive aroma of amber when the warm up and the relevant hardness of Baltic amber in comparison with younger copals that are soft when collected. So this is the factor that ranks Baltic amber in the highest category (AA ) . On the contrary St. Dominic’s amber is much softer, aged between a few hundred years up to the 25 million years ( in very small quantities), and with much lower content in succinic acid. (According to the research of scientist George Poinar Jr. Roberta Poinar and in their book The Amber Forest: A Reconstruction of a Vanished World, 1999, the Dominican amber is dated between Oligocene and Miocene periods that reaches up to 25 million years). Another difference...

It is a fact that uniform amber beads cost much more than uneven amber beads of equal weight. In this post we will explain the reasons leading to this fact. Let’s start from scrach, i.e. from the mining process of amber, when it comes out of the earth in the form of irregular shaped pebbles. At the selection process, pebbles that have many admixtures in other constituents are separated from the pebbles that are “clearer”, with very few admixtures. Those with more admixtures – usually contain pieces of wood, fossilized leaves, soil, etc. – are intended to be cut and get marketed as irregular shaped amber beads or pebbles, while the “clearer” will be carefully cut and polished to obtain perfect shape with smooth edges. Based on the working hours and the discarded quantities of original material required by the above processes, we conclude to the following rule: irregular shape amber beads are sold cheaper – since they haven’t undergone many processes to gain their final shape, and the quantities of the discarded material are small, while, conversely, the “clear” and perfect shaped beads have significantly higher price than irregular shape amber beads of equal weight, because of...

Nowadays most of us look suspiciously at various consumer goods that have high prices or continuously get more expensive. One such commodity is Baltic amber, the fossilized resin that its age exceeds 25 million years … Read more about how amber is formed here. Who wouldn’t like to hold an amber efhantro komboloi! What are the reasons for the constant increase in the price of amber? Can we get genuine amber products at affordable prices today? Given the fact, that Amber is a source of electrical energy, truly beneficial to the human body, while its deposits are very limited, the demand of amber has really taken off. The prices per gram, especially in very old pieces (i.e. Kahraman amber) have reached in the Greek market, at current month the price of 150 €/gram, while in China they surpassed 400 €/gram. It is anticipated that amber prices will rise even more because demandin amber is increasing and a lot of people choose to invest in this material. As in the past was gold, so at present, amber is not just a luxury asset, but a very good investment! All the above most certainly concern pure solid amber rather than amber powders, pressed amber or its imitations. Nevertheless,...

Truths and fairy tales about amber

It’s true that when you set amber on fire, it burns! It’s true that amber has a specific weight of 1,2 and it practically floats on salted water. It doesn’t float on sea water due to its uncontrolled content in salt but it can move for miles in it. It’s true that it has a roughness of 2,4, hence it brakes and wares away easily. Therefore, we don’t put it on a string neither do we slam the beads. It’s true that a worry beads with even beads costs twice as much as a one that weights the same but has uneven beads. That’s because we grind a lot of amber until all beads have the same shape and dimensions. It’s true that only the carbon-14 test provides full proof about the material we are investigating. Using our senses provides indications, not proofs. Whatever runs counter to the aforementioned is a fairy tale that is spread by clueless, opportunists, idiots and crooks.

Buying amber from sellers that do not win our trust is risk; due to the fact that modern solidified resins are sold for amber. These compositions are detected only by the test of carbon 14, attesting the age of the fossil. But it costs about 2000 € and few are the ones who take this test. Thus, solidified resins are sold as modern amber, even accompanied by certificates of authenticity, since with our senses we cannot distinguish the solidified resin from genuine amber. 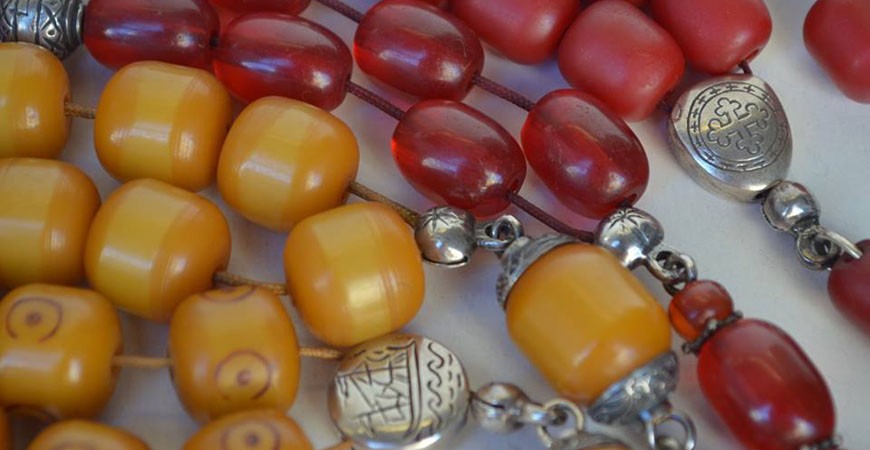 Faturan, mastics and sudurus are chemical attempts to imitate real amber. They deserve a position at your collection because of their antiquity. They also have beguiling colors and their beads produce enchanting sounds. They are aged between 60 to 120 years. The tradition says they are consisted of amber dust, of frankincense, bakelite, colophony and mastic dust. There is no certitude for their composition, unless we analyze them chemically. Their antiqueness results their value. The company “EFHANTRO” has collected until 1976 nothing but the best, in faturan, mastics and sudurus at the Arabic world. At that time, they were very rare. Today the market is stuffed with these so called”old”. So, if the cap fits, wear it!

We hope you are safe and strong during these difficult times.
While the STAY HOME regulations are on, we keep serving you online.

We would like to inform you that due to restrictions related to safety measures against the spread of COVID-19, we schedule the shipments of the orders 2 times a week, Tuesday and Friday.