Goldstone in its current form, is a mineral that has been created artificially. The Alchemist priests were the first to manufacture it. It was a secret formula that they used to make gifts to gods and kings, thus seeking for their favor. Its chemical composition is silicon dioxide (in this case, man made glass) by injecting powdered metal bronze in it. During the Victorian era people called Goldstone, chrysoberyl. In antiquity, they meant the mineral olivine and peridot (Chrysolite that means goldstone). The olivine and the transparent quality of peridot have colors in shades of green. The name Goldstone probably came because people believed that this stone contained gold. Before about 100 years, glassmakers from Murano island, constructed a quality glass, which contains copper filings, has a brown color, and displays the iridescence of aventurine. This glass is called Goldstone, which is still popular today. It has a hardness of 7 on the Mohs scale. Υou will find Goldstone in orange-brown and dark night blue colourings. It is the only one of the technical gems that due to its chemical composition, energy properties are imparted to it.

Goldstone according to tradition is said to be the stone of ambition. It builds energy, courage and a positive attitude. Increases drive and confidence. A gently uplifting stone, goldstone promotes vitality. It protects against envy, misfortune, depression, emotional disorders and blocked energy.

Filter By
Filter
Name, Z to A 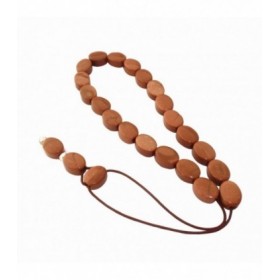 €42.00 €52.00
These worry beads efhantro consist of 21+2 brown Goldstone beads and sterling silver accessories. Beads are carved in barrel shape with dimensions of about 11x14mm.  The total length of this efhantro is 31cm and its...
Add to cart
Quick view
Add to wishlist
Love
Share

€195.00 €230.00
These worry beads efhantro consist of 19+1 brown Goldstone beads and 2+1 shell beads. The beads' dimensions are 11x14mm. The shield bears a cross symbol. All accessories and chain are made of sterling silver. The...
View more
Quick view
Add to wishlist
Love
Share

€165.00 €207.00
This komboloi consists of 19+1 brown Goldstone beads and 2+1 clear quartz beads. The beads' dimensions are 11x13mm. The shield bears a sun with meanders. All accessories and chain are made of sterling silver. The...
Add to cart
Quick view
Add to wishlist
Love
Share

€35.00 €42.00
This efhantro (kompoloi-worry beads) consists of 25+2 blue Goldstone beads, with bead' diameter 12mm.  Sterling silver accessories . The total length of this efhantro is about 30 cm  and its weight is 60 grams.
Add to cart
Quick view
Add to wishlist
Love
Share 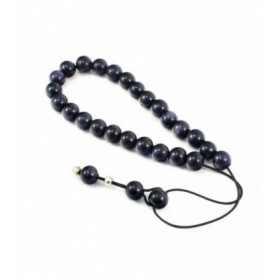 €27.00 €32.00
These worry beads - Greek komboloi consist of 25+3 blue Goldstone beads with a diameter 12 mm and sterling silver accessories. Its length is 29cm and its total weight is about 63 grams. Since this product is natural...
Add to cart
Quick view
Add to wishlist
Love
Share