First discovered in the United States in the Unakas mountains of North Carolina. Unakite, also called epidote, derives its name from the Greek epidosis, meaning “growing together”. It is a combination of red jasper and green epidote solidly bound together. In good quality unakite is considered a semiprecious stone, is often used in jewelry and other lapidary work such as eggs, spheres and other carvings like animals.Unakite can be found as pebbles and cobbles from glacial drift in the beach rock on the shores of Lake Superior. Unakite is not limited to the United States, but has also been reported from South Africa, Sierra Leone, Brazil, and China.

Unakite according to tradition balances emotions with spirituality. Unakite supports convalescence and recovery from major illness. It treats the reproductive system and stimulates healthy pregnancies while facilitating the health of the unborn. 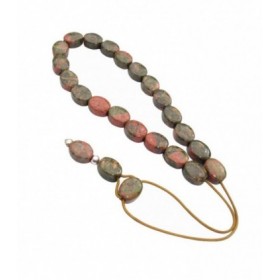