Aventurine is a translucent to opaque variety of quartz. It contains small inclusions of shiny minerals which give the stone a sparkling effect known as aventurescence. Aventurine ranges in color from green, peach, brown, blue and a creamy green. Besides its uses in jewelry, aventurine is also used for ornamental purposes like vases, bowls and figurines.It is interesting that the name for the stone is derived from an accident. Sometime during the 18th century, Venetian glass workers were preparing molten glass when copper filings accidentally fell into the batch producing a glass with sparkles. The name aventurine comes from the Italian “a ventura,” which means”by chance”.In Ancient China Aventurine was called the Stone of the Emperor and was used as an amulet that brought happiness, renewal and clarity of mind. Aventurine is found in India, Chile, Spain, Russia, Brazil, Austria, and Tanzania. It has hardness 6.5 on the Mohs scale . This mineral is often mistaken for amazonite or jade. There is a rumor that before jade became popular, imperial seal of Ancient China was carved on an aventurine stone, for the reason that all the green stones are considered Divine and Heavenly. 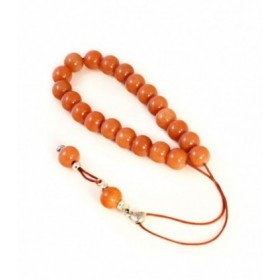 €38.00 €45.00
These worry beads efhantro consist of brown aventurine beads with diameter 12mm/ 0,47 "  and sterling silver accessories. The total length of this efhantro is 28cm / 10.92 inches and its total weight is 56 grams /...
Add to cart
Quick view
Add to wishlist
Love
Share 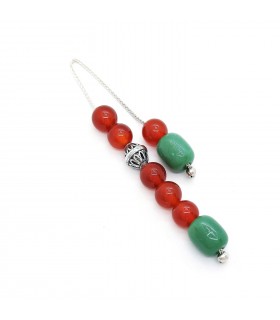 €37.00 €44.00
This Begleri beads is made of Green Aventurine and Carnelian semi precious beads and of sterling silver accessories. It consists of: - 6 carnelian with a diameter of about 12 mm  - 2 aventurine beads with dimensions...
Add to cart
Quick view
Add to wishlist
Love
Share
Showing 1-2 of 2 item(s)