Obsidian is a naturally occurring volcanic glass formed as an extrusive igneous rock. That means, it is the rock formed as a result of cooled magma, which is the parent material. It is an acidic rock , dark with glassy texture (is regarded as natural glass) and has been used due to its formation and durability, since the end of the Upper Paleolithic period to manufacture blades with sharp edges, used for knives and razors. It is a 5-5.5 of hardness at the Mohs scale. Obsidian can be found in locations which have experienced rhyolitic eruptions, such as Argentina, Armenia, Azerbaijan,Canada, Chile, Greece, El Salvador, Guatemala, Iceland, Italy, Japan, Kenya, Mexico, New Zealand, Peru, Scotland and the United States.

According to the tradition, the Οbsidian is considered an extremely protective stone as it not only removes the negative energy but also returns it to its source. It is also thought to boost growth at all levels, prompting exploration of the unknown, opening up new horizons, bringing spiritual clarity and self-awareness while helping to digest, detoxify, reduce arthritic pains, ligament problems and cramps. 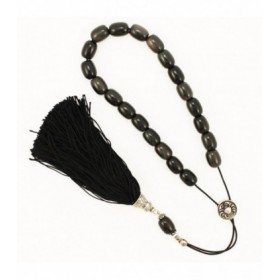 €87.00 €104.00
These worry beads consist of 21+1 Obsidian semi precious beads, sterling silver accessories and pure silk tassel threads. The shield is decorated with the sign of Cancer.  It is available in two versions: - with...
View more
Quick view
Add to wishlist
Love
Share 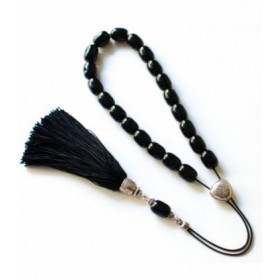