SHELL beads come from the outer testa of marine animals called shellfish. Shells perform a great variety in their forms, sizes and colors. Their structure is very hard and durable. They are created by calcareous or titanic or chitinodic secretions excreted by glands located under the mantle of the animal.

Μan observed sea shells from early times. He added them to his daily diet. They were proved nutritional and aphrodisiac. He used shells to make utilitarian objects. But especially he has created and still does fine jewelry, because some shells have incredible color combinations in their outer testa and the interior has wavy reflections. We call them mother of pearl and sometimes, ivory, even though the elephant tusks are also called ivory. Some shells (i.e. oysters) trap within them grains of sand, etc. that are converted to pearls. There has been discovered a 405 years old shell!

SHELL according to tradition, stimulates intuition, sensitivity, imagination and adaptability. It treats hearing disorders and calcium deficiencies. It assists the healing of broken bones and general malfunctions of the spinal canal and the nervous system. 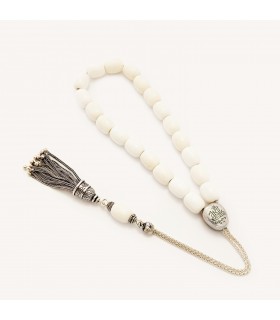 €120.00 €143.00
These kompoloi - worry beads efhantro consist of Shell beads and sterling silver accessories. Beads dimensions are about 10mm x 13mm. Its length is 32 cm and its total weight is about 69 gram. The shield separator is...
Add to cart
Quick view
Add to wishlist
Love
Share

€242.00 €285.00
These worry beads - Greek komboloi is made of lapis Lazuli and Shell semi precious beads and sterling silver accessories. The separator shield is decorated by the yin yiang and meander symbols and the tassel's funel...
View more
Quick view
Add to wishlist
Love
Share 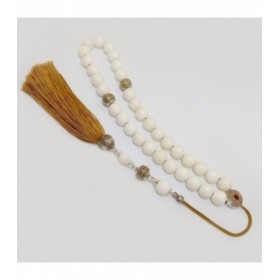