Carnelian is a form of chalcedony. Carnelian is a 7 on the Mohs scale of hardness and has been used for centuries to carve beautiful cameos. It is found in Australia, Brazil, Madagascar, Russia, South Africa, and the USA.

Carnelian, according to tradition, protects against envy, rage and resentment. In antiquity, carnelian is believed to help timid speakers become both eloquent and bold. Ancient Warriors wore Carnelian around their neck for courage and physical power to conquer their enemies. In Egypt it was worn by master architects to show their rank of builder. It was the first stone in the breastplate of the High Priest, which was believed to prevent illness and the Plague. It calms anger, banishes emotional negativity and replaces it with a love of life. The ancient Egyptians called Carnelian “the setting sun”. It has been associated with the fertile menstrual blood of the mother goddess, Isis, and traditionally it was worn to enhance passion, love, and desire. For this it is called “stone of passion”. It is generally considered the stone that provides encouragement to overcome every adversity.It treats lower back problems, rheumatism, arthritis, neuralgia and depression. It regulates the kidneys, and accelerates healing in bones and ligaments. Improves vitamin and mineral absorption and ensures good blood supply to organs and tissues. Carnelian is said to attract prosperity, new resources and good luck. It is a talisman for success in any money-making venture. In the workplace, it is a crystal of ambition, drive and determination, and wards off undue pressures of co-workers or impersonal corporations with unrealistic expectations. 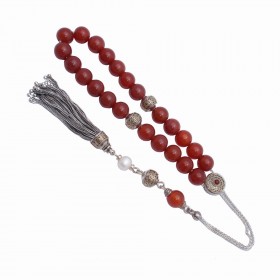 €730.00 €861.00
These worry beads efhantro consist of  23+1 carnelian beads, with diameter  12mm. The decoration is completed by a F.W.Pearl bead and  accessories by sterling silver and handmade 14K gold wire decoration.
Add to cart
Quick view
Add to wishlist
Love
Share
Showing 1-1 of 1 item(s)